Concrete blocks and cinder blocks, as well as split face blocks and lightweight blocks, are all referred to as CMUs (concrete masonry units). CMUs are used for the construction of load-bearing foundation walls, basement walls, partition walls, exterior walls, retaining walls, and non-load bearing partition walls. Employing reinforcement bars and filling the hollow cores with concrete results in strong structural walls. CMU's may look similar, but there are big differences among them!

Standard (high-density) concrete blocks are made from cast concrete – Portland cement, sand, and gravel. Compared to typical structural concrete, they are made with a higher percentage of sand and a lower percentage of gravel and water for a stiffer mixture which holds its shape when removed from the block mold. The typical high-density concrete block (8 x 8 x 16 inches with two cores) weighs 36-42 lbs. per block.

Lower density blocks may use industrial wastes, such as fly ash or bottom ash as an aggregate instead of the sand or fine gravel used to make true concrete.

"Cinder block" is an archaic term from the time when power plants and coke ovens in steel mills produced huge amounts of "cinders" from burning coal. They were patented back in 1917. Modern cinder blocks are usually made with volcanic pumice instead of cinder unless there is a nearby coal-fired power station or cement kiln to supply pulverized cinders or fly ash.

There are builders that prefer cinder blocks because they are much easier to work with. Compared to a heavyweight concrete block, a typical cinder block weighs only 26-33 lbs. However, cinder blocks are more subject to moisture, water seepage, radon gas, salt deposits, and efflorescence (white powdery residue) problems because of their high porosity. Which is why they are generally used in interior non-moisture construction or outdoors for barrier walls, hardscape, and fences.

A cinder block is much more porous compared to a standard concrete block or poured concrete. Cinder blocks are classified as permeable to water and water vapor (+10 perms). Heavyweight concrete blocks are semi-permeable (5 perms) and less so when the hollow cores are filled and packed with a slurry mix of concrete (about 2 perms). In comparison to blocks, good quality, newly poured concrete foundation walls (8-10" in thickness) are impermeable to water (0.4-0.3 perms).

Making matters worse, only a thin wall (1-1/4 inch) separates the hollow cores of the block from the cores filling up with water. Damp cinder block walls are most noticeable after incremental weather; wind-driven rain, substantial heavy rains, water-soaked ground, saturated zones, and high-water tables. When cores of the blocks are retaining ground water, the thin walls offer little resistance against hydrostatic water pressure and the cinder blocks leak. Water easily passing through the cracks in the mortar joints and pushing through the pores causing the walls to dampen inside the basement.

If you have a wet basement, and the basement foundation walls are constructed with cinder block, they are much more likely to leak water compared to poured concrete walls. It may take 5-10 years, but once the exterior waterproofing coatings and damp-proofing membranes deteriorate, the cinder blocks will be on their own to fight against negative side water pressure. It's a losing battle – cinder blocks are water permeable!

Exterior, above-grade cinder block walls (retaining walls, decorative walls) are not subject to hydrostatic water pressure complications. However, during periods of wind-driven rains and substantial heavy rain, water is easily pushed into blocks and through the wall!

Applying a Concrete Sealer is Important

Prevention is much easier and cheaper than cure! If you do not seal the cinder blocks with RadonSeal Plus Deep Penetrating Concrete Sealer and Ion-Bond Armor Elastomeric Concrete Sealer before the issues start, they may become unsealable in the future. Years of continuous water seepage will enlarge the pores of the blocks, pinholes will begin to develop and leak water, and efflorescence will loosen and leach out from inside the concrete. Sealing cinder blocks will extend their life by protecting them against water, the main enemy of concrete.

Extensive water seepage can carry soil and silt through the concrete and begin to plug the pores of the blocks making it harder for RadonSeal Plus and Ion-Bond Armor Elastomeric Concrete Sealer to properly waterproof the substrate. The telltale sign of soil buildup within the matrix of the block would be a brown or "reddish" color to the interior surface of the wall. The plugged pores of the blocks may prevent RadonSeal and Ion-Bond Armor from penetrating and reacting inside the concrete.

Blocks that are unable to be sealed from the inside/out with penetrating sealers, waterproofing paints, cementitious parge coatings and rubberized membranes would require expensive exterior solutions. There is no cure!

Did You Know? Some cinder blocks release mercury and other heavy metal contaminants which is another reason for sealing them. – Coal Combustion and Gasification Products (CCGP)

How To Waterproof Your Cinder Block Foundation

To waterproof, strengthen, and preserve the overall appearance of your basement cinder block walls, seal the blocks permanently against moisture and efflorescence with RadonSeal Plus Penetrating Concrete Sealer. RadonSeal is the strongest formulated penetrating concrete sealer available and is recommended for use on below-grade and slab-on-grade concrete applications because it is permanent and is completely resistant against hydrostatic pressure.

While RadonSeal Plus alone can successfully seal most basement cinder block walls, there is a possibility it may not completely suffice for waterproofing ALL cinder blocks. Why? RadonSeal works by reacting with cement. Cinder blocks use industrial wastes, such as fly ash or bottom ash, as an aggregate instead of the sand or fine gravel used to make true concrete. For these more challenging cases, the combination of using RadonSeal Plus and Ion-Bond Armor may be required.

Follow these steps to help prevent basement water seepage through newly constructed basement walls or cinder blocks that have leaked in the past:

Using RadonSeal Plus along with Ion-Bond Armor are the best concrete block sealers for use on cinder blocks and have proven foolproof for many frustrated homeowners! Truth be told, older cinder blocks and sandstone foundations that have been exposed to decades of water seepage may require special steps to properly fill and seal the enlarged pores and pinholes.

There are many different types of concrete blocks that vary widely by composition, additives, region, and manufacturer. Since RadonSeal Plus seals concrete by reacting with Portland cement, it simply can not be guaranteed to seal all blocks with little to no cement (cinder blocks contain fly ash). With a that said, ALL waterproofing sealers, concrete paints and coatings will have difficulty sealing blocks with unusually large pores!

Adopted in 1997 and has proved successful in many apparently hopeless situations!

A stronger alternative to thinset mortar is to skim coating the basement walls using our ElastiPoxy Joint & Crack Filler Kit. When mixed with sand, ElastiPoxy cures as a hard waterproofing barrier against water seepage. Particullary useful on dilapidated and crumbling block foundation walls that leak like a sieve. 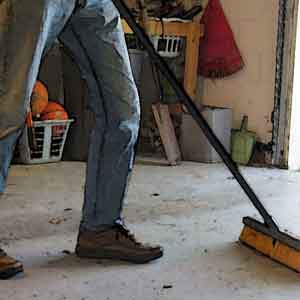 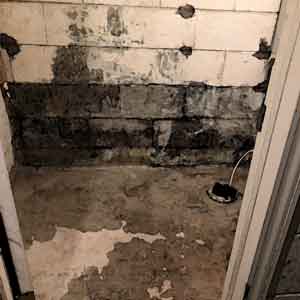 HELP! My Basement is Wet