How Radon Gas Sneaks into Homes

Radon is Found in Homes all Over the U.S.

Radon is an invisible and odorless radioactive gas. Elevated levels of radon have been found in homes all across the country. Any home in any state may have a radon problem: new and old homes, well-sealed and drafty homes, and homes with or without basements. Radon gas gets into all types of buildings, including office buildings and schools.

You and your family receive the greatest radiation dose in your home. That’s where you spend most of your time – 70 to 75 percent, more for small children. Each year, the average person receives more radiation from radon than from all other natural or man-made sources combined. Over the years, the accumulated radiation exposure of homeowners may exceed the exposure of uranium miners.

Radon in the Soil Gas

When radium atoms disintegrate into alpha particles and atoms of radon, 10 to 50 percent of the radon atoms escape from the mineral grain into the underground “soil
gas,” which also carries biological decay gases and moisture. In most areas of the United States, the soil gas contains between 200 and 2,000 pCi of radon per liter but soil measurements ranged from 100 to 100,000 pCi/L. As radon slowly diffuses from the ground into the ambient air, its flux varies widely but, typically, one square foot of soil emits 130 pCi of radon each hour (0.4 pCi/m2s). In the United States, the resulting outdoor radon level averages 0.4 pCi/L. However, the stacks of radon mitigation systems emit undiluted soil gas with radon concentrations 2,000 times higher, averaging over 1,000 pCi/L.

As radon gas moves through underground fissures, it usually decays into solid particles after several feet. However, it travels much farther in dry, permeable soils, like gravel or coarse sand. Radon is partially soluble in water and underground streams can carry it long distances. This unpredictable underground movement of gas explains why homes in low-radium areas can have high radon concentrations and why radon testing levels between adjacent houses can vary several-fold.

Soil – Radon from soil is by far the main source of indoor radon. Radon gas naturally moves into the permeable disturbed soil and gravel bed surrounding foundations and then, inside the buildings through openings, cracks, and pores in concrete.

Private Water Wells – If you have a private water well, radon from the water gets released into the air in your home during showering and when washing dishes or laundry. As a rule of thumb, each 10,000 pCi/L of radon in water increases its level in indoor air by 1 pCi/L. Inhalation of the radon gas released into the air is much more dangerous than its ingestion with drinking water. In the U.S., the average radon concentration in the surface water is 10 pCi/L but 750 pC/L in well water. However, levels exceeding 20,000 pCi/L are not uncommon. Even some public water supplies have been found to have radon concentrations up to 270,000 pCi/L (NAS 1999b). To check the level of dissolved radon in your private water, get our Radon-in-Water Test Kit.

Rock, Brick, and Concrete – Building materials like rocks, bricks, gypsum, and concrete contain some radium and emit radon, as well as some marble countertops although the recent publicity is over-blown. They emit Radon-222 and Thoron (Radon-220) but only 0.1 – 0.3 pCi/L each in a typical basement. The very short half-life of Thoron (96 seconds) reduces its typical concentration in homes to 0.3 pCi/L.

Water Migration – Radon is partially soluble in water and thus gets indoors also by “water migration.” Water is drawn into concrete by the capillary action of the pores in concrete or pushed in by hydrostatic pressure (seepage). The higher temperature and lower pressure indoors release the dissolved gas. Water in sump pits also releases radon.

Outside Air – Radon gas from outside air also settles in basements of homes because it is eight times heavier than air. Radon released by tailings from uranium mines was found to travel hundreds of miles and settle in homes. But more commonly, radon gas released from the soil is drawn into basements over the top of the foundation, through bulkhead doors, or uncaulked basement windows. It can be even drawn into the attic underneath uncaulked siding and then sink into the house.

How Buildings Draw Radon Gases from the Ground

The “stack effect” – Soil gas carrying radon moves to the permeable gravel and disturbed ground around the house, particularly when “bottled up” by frozen or rain-soaked ground. The air pressure inside homes is slightly lower than in the ground (typically 0.7-1.4 psi vacuum), which draws in radon gas from several feet away. The warm air inside buildings moves naturally upwards and this “stack effect” reduces air pressure in the basement or crawlspace.

Appliances – Furnaces, hot water heaters, clothes dryers, fireplaces, exhaust fans, and vents reduce the indoor pressure further and draw in more soil gas. A typical clothes dryer may exhaust 100 cfm of air and a kitchen fan about 750 cfm. In very tight homes, this may de-pressurize the house so much, say below 5 Pa, that it will reverse chimney flow and cause combustion spillage from appliances.

Advection – The resulting negative pressure in basements causes pressure-driven flow (advection) of radon gas drawn through openings or cracks and through the pores in concrete. But this pressure-driven infiltration of radon is only a part of the radon inflow into basements or crawlspaces.

Diffusion – Radon is also pulled in by diffusion which is driven by the difference in radon concentrations indoors and in the soil. Like all gases, radon tries to equalize the indoor concentration and its atoms easily penetrate through the pores in concrete. The average concentration of radon in soil exceeds 1,000 pCi/L, while the average indoor concentration is only 1.2 pCi/L. The diffusion flow through an intact concrete slab driven by diffusion is several times higher than the pressure-driven advective flow. Diffusion contributes up to 80% of the radon level found in homes. This also explains why mitigation methods of pressurizing the basement do not work.

Concrete cures by reacting with water – hydration. But almost half of the water added to the concrete mix for workability is surplus and has to evaporate. As the surplus water in newly poured concrete pushes to the surface, it leaves behind a network of capillaries (pores).

The pores constitute 12 to 18% of the concrete by volume. Their diameter is much smaller than a single human hair but the pores are much larger than radon atoms or water molecules. They let in soil gas carrying radon and water vapor.

The dominant transport mechanism by which radon gas moves through an intact concrete slab is concentration-driven diffusion. Studies have shown that indoor radon entry rates can be greatly affected by the type of concrete mix employed. 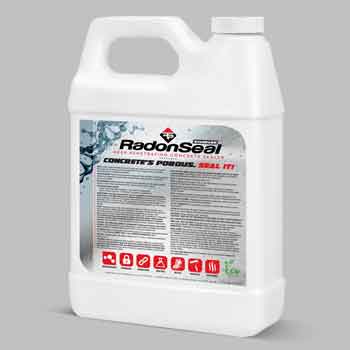 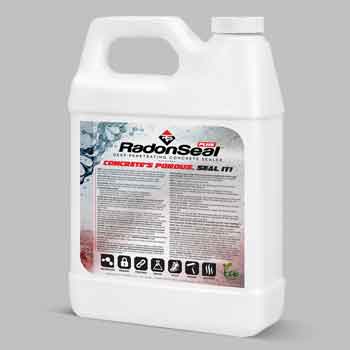 RadonSeal Deep-Penetrating Concrete Sealer reacts with alkalis in concrete, expands inside the capillaries, and seals the concrete against water, moisture vapor, and even the single-atom radon gas. Instead of removing radon from underneath the slab by a fan, it simply seals the concrete and leaves the gas in the ground. Sealing the pores greatly reduces radon diffusion and advection through the slab and basement walls. At the same time, it blocks water seepage and reduces water vapor transmission. Read up on RadonSeal Uses, Limitations, and Application

Compared to fan mitigation systems, RadonSeal does not depend on the permeability of soil underneath the slab and reliability of mechanical equipment or the power grid. RadonSeal does not need to be re-applied because it cures as a mineral and seals the concrete permanently. Moreover, it does not spew a plume of heavy, radioactive gas above the roof of the house. In case a fan-based radon mitigation system is already installed, RadonSeal will lower its energy losses in treated air drawn out through the slab and will reduce the radon level further.

Radon, soil gasses, and water vapor will easily pass through any openings, cracks, gaps, drains, or thin concrete (rat slabs) in the basement. In addition to sealing the basement floor and walls with RadonSeal Penetrating Concrete Sealer, all openings have to be sealed off or caulked to stop the infiltration of radon, as well as soil gas and water vapor. Common openings in basements:

DIY Concrete Foundation Crack Repair Kits – The choice for sealing cracks in poured concrete walls by injecting expandable polyurethane foam or epoxy. Hydraulic cement does not bond well to concrete and would soon get loose.

CrackWeld Concrete Floor Repair Kit – The permanent full-depth repair of cracks in slabs. No routing is needed. Surface caulking would soon detach as moisture degrades its bond to the concrete surface.

Accumulation of Radon Inside Homes

Modern houses tend to build up radon because the building envelope is almost airtight while the foundation is “leaky” to soil gas. The soil gas infiltration from basements ranges from less than 1% to over 20% of the total “fresh air” infiltration into homes (typically 3-5%). Opening basement windows to increase ventilation may help by removing the radon gas but it wastes energy and may actually draw in more soil gas. The best solution is sealing the concrete to ensure the foundation is more airtight than the building envelope.

Radon gas accumulates in basements because of low ventilation. Heating and air-conditioning, natural air movement, the “stack effect,” as well as diffusion
of radon gas through the floors and walls distribute radon throughout the house. This, in turn, draws in more radon from the ground by concentration-driven diffusion until an equilibrium radon level is established on each floor in the house.

According to the Iowa Residential Radon – Lung Cancer Study (2000), the median first-floor radon concentration in one-story homes is, on average, 60% of the basement level. But for two-story homes, the median radon levels at first and second floors are 51% and 62% of the basement level, respectively. However, the radon levels vary greatly and there have been cases of radon concentrations being the highest at the top floor of multistory buildings.

Can I Reduce Radon by Ventilation?

Most people would assume that increasing ventilation by opening windows or turning on a vent fan will reduce the radon concentration inside the house. But contrary to expectations, numerous studies show that there is no correlation between ventilation rates and radon level. The reason is that the inflow of radon gas is not constant but will increase with a higher ventilation rate, offsetting the dilution by ventilation.

How To Reduce Radon in Homes